While the rest of the country is dealing with snow, we have been having such pleasant weather—lower temperatures and less humidity. I certainly can’t complain! I’ve been enjoying the seasonal change on my recently constructed DIY deck (by yours truly) with my new patio furniture. I like to call it my “wine country.” My latest “wine country” sip of choice was COMM. G.B. Burlotto Verduno Pelaverga 2017.

Verduno Pelaverga (or simply Verduno) is a red wine DOC of Piedmont in northwestern Italy. It was one DOCs created in the mid-1990s in a move to promote Piedmont’s lesser known wines. Pelaverga is a rare, dark-skinned grape variety native to Piedmont. It produces pale, strawberry scented wines similar to the lightest Freisa or even Pinot Noir.

Verduno Pelaverga wines have the option of being labeled with the “vigna” designation. This is available only to wines made from vines more than seven years old, whose fruit are of more reliable quality. A slightly lower yield allowance is also imposed on wines bearing this term to ensure greater concentration of flavor and varietal character.

The Burlotto family is one of the oldest families involved in the production of Barolo wines. During his seventy-seven years as a winemaker (1850-1927), G.B. Burlotto’s accomplishments were rivaled only by those of Biondi-Santi and Vega Sicilia, as G.B. achieved superstardom in a world dominated by French wines. Today, Burlotto has re-emerged as one of Piemonte’s great small producers, thanks to the brilliant and highly traditional winemaking of G.B.’s great-great-grandson, Fabio Alessandria.

He pioneered selling Barolo in bottle (not cask or demijohn), predating even Giacomo Conterno’s Barolo Monfortino. And as official supplier to the Royal House of Savoy—which once ruled Piemonte—he not only achieved personal fame, he made his village of Verduno as renowned as Serralunga or La Morra.

G.B.’s death in 1927 not only took away Burlotto’s driving force, it also deprived Verduno of its greatest champion. And so both faded into obscurity in the decades that followed. But now, with G.B.’s great-great-grandson Fabio Alessandria as winemaker, Burlotto’s star is again rising, reclaiming its position as one of Piedmont’s great small producers.

It was a ruby red, lovely color. It was full of red fruit—light and silky. It felt lush. I got a lot of raspberries and some pepper. It had nice tannins. Dry, but very smooth. Totally bringing a bottle to my Pinot Noir-loving momma. I got this bottle at Wine by the Bay. I forget the price—I want to say it was in the $30 range. Perfect for some Miami winter outdoor sipping. 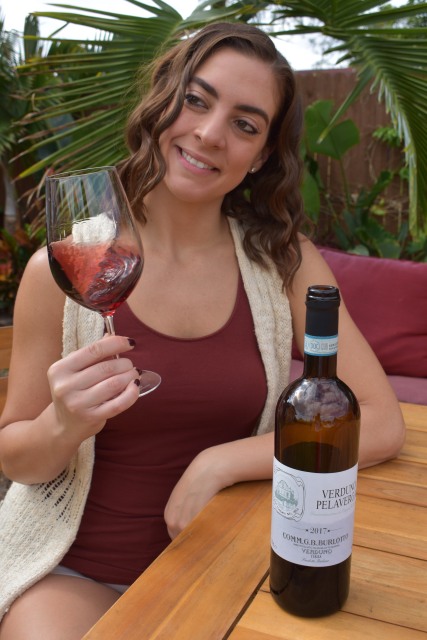